The first airplane ride of my life was leaving Portland International Airport bound for San Diego early in the morning on October 27, 1969.  I don’t 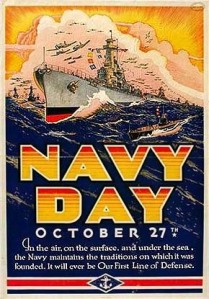 Ironic that this shows the date October 27, the date I entered boot camp in 1969

remember much of that first day since it was all new surroundings and situations plus I was probably severely hungover.  I think we were mostly just shuffled around prior to any official orientation.  What I do remember though, was waking up the next morning in a strange place in the top bunk in a barracks for in-processing new recruits.  We didn’t wake up to a gentle voice or pleasant clock alarm.  A couple of Petty Officers were stomping around the barracks beating on garbage can lids with night sticks and yelling at the top of their lungs for us “fucking maggots” to get up, get dressed and be out on the grinder in 5 minutes.  Yikes!  I knew this was going to be a change, but you have no clue until you go through it.

Me and Dewey DeLawder, with whom I enlisted on the buddy system.

The first few days are a blur as you’re assigned to a company, get the haircut, get your clothes fitted and issued as well as a bunch of other things with 40 other guys.  Everyone was issued a stencil that had their last name and initials and service number.  At each clothing station you were given instructions on exactly where to use your “stencil pencil” to apply your name on every single piece of clothing.  You had one with white ink for dark clothing and one with black ink for lighter items.  I can still smell the fumes from that ink.  Even though a couple of years later the Navy switched to Social Security numbers for ID, my original service number is one of those numbers forever burned into my memory.
END_OF_DOCUMENT_TOKEN_TO_BE_REPLACED