I don’t remember the exact date or time anymore but I can still vividly recall my days aboard the Hammond as if they were yesterday. One particular day I remember even better than the rest. We were conducting one of our standard “draw fire” missions off the coast of Vietnam during the war. This was something we seemed to do almost every day.

I was wearing a flak vest and helmet as I stood aft lookout watch up on the helo deck. The midday sun made it very hot and humid in the South China Sea. My helmet sat on the deck at my feet and my vest was wide open, barely over my shoulders. The helo deck is a wide open deck running the entire width of the ship where our LAMPS 2 helicopter lands. It offered no protection from either the sun or what was about to happen next.

I was leaning on a stanchion on the starboard side paying no particular attention to anything when a geyser of water exploded skyward just off the port side the ship. I was frozen in fear and time stood still. From the water column I saw large chunks of shrapnel flying straight at me. As the metal rained down I threw on my helmet and closed my vest. I immediately called the incoming rounds up to the bridge and gave bearing and degrees to where I thought the rounds had come from. Looking down, a large chunk of metal lay at my feet. I tried to pick it up but it was hotter than hell. To this day I cannot believe that I was not hit by that blast.

Shells started falling all around the ship. First they fell in front of the ship and then they started to fall off the starboard side. The commies had indeed found our range and began walking rounds in on the ship. Round after round landed in the ocean on the starboard side, each a little closer than the next. I knew within a round or two they would be falling where I stood. I truly believed I was going to be blown up that day. I will hear very few sounds in my life as sweet as that high pitched whine of the ship’s turbines as we kicked it into full speed. The next set of three rounds fell in our wake where we had been moments before.

As we moved a safe distance away from the mountains where the cannon roared the bridge sent a buddy of mine, Eugene Heckt, back to check on me. Gene took one look at me and just started laughing.

“Keith, you look you just saw a ghost!” Gene chided.

I was none too amused. 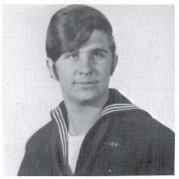