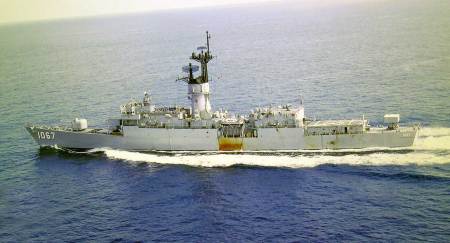 Franny H. on Yankee Station. Why all the rust under the captains gig? Photo by Jim Marino.

One day during the 1972 Westpac we had a day out on Yankee Station with no flight ops because the USS Coral Sea (CVA-43) was having a USO show onboard. All ships in the Task Force were allowed to send 4 crew members to the Coral Sea to attend the show. On the USS Francis Hammond we had a lottery or raffle drawing type of contest. RD3 Jim Marino won and was allowed to pick 3 other guys to go with him. He selected RD3 Jake Holman, RD3 Marv Martin and RD3 Phil “Beetle” Bailey.

Bob Hope was scheduled to headline the show, but cancelled due to the dangerous conditions. He had done shows onboard the USS Coral Sea earlier in the war. Jim said the show was put on by some “B” list celebrities. And I thought Bob Hope was the “Ironman” of show biz! Actually, he did a Christmas show in Vietnam later this year of 1972. I think I read somewhere that he did 13 consecutive Christmas shows for the troops there. God bless Bob Hope for all he did for the airmen, troops and sailors providing a short period of calm in an otherwise tense environment.

A chopper from the Coral Sea arrived over our helo deck to pick up Jim, Jake, Beetle and Marv to take them to the show. Jim got some great photos as you can see with this article. He says the helo ride over was “kick-ass”! 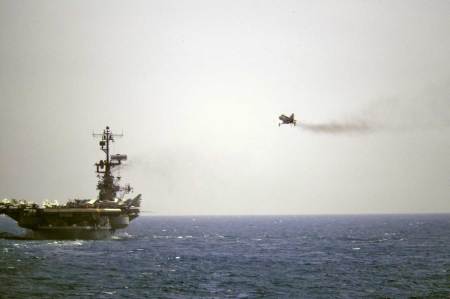 Our usual view of the USS Coral Sea while on planeguard duty. Photo by Jim Marino.

This entry was posted on Monday, January 9th, 2012 at 7:13 am and is filed under US Navy, USS Francis Hammond, Veterans. You can follow any responses to this entry through the RSS 2.0 feed. You can leave a response, or trackback from your own site.

One Response to USO show on the USS Coral Sea